Some Things Are Meant to Be - Hanna Keith Lewis

"It's the things you don't expect that make you prove yourself."

Hanna Keith married her high school sweetheart, Garrett Lewis on May 21. It was a date she was determined to keep despite the fact that, less than a year ago, she had been diagnosed with breast cancer. The couple wound up choosing a plastic surgeon in addition to all of the other (much more fun) choices they were making together.

“Everything happens for a reason,” Hanna says philosophically. “It was crazy how they found it. A miracle they found it at all.”

Hanna was diagnosed with breast cancer in June of 2015, after she sought routine care for stress fracture in her foot. Her primary care physician is an ortho-oncologist as well and suggested a mammogram, especially considering her history… As many in her hometown of Jesup, Georgia know, this would not be Hanna’s first battle with cancer.

Hanna was 12 years old when she was diagnosed with bone cancer (osteosarcoma). Following resection of a tumor in her leg, she endured chemotherapy and whole-body radiation, inspiring an entire community with her faith, her courage, and her good cheer.

“She’s a heck of an inspiration to a lot of people,” Garrett says of his new bride, “Including myself.” 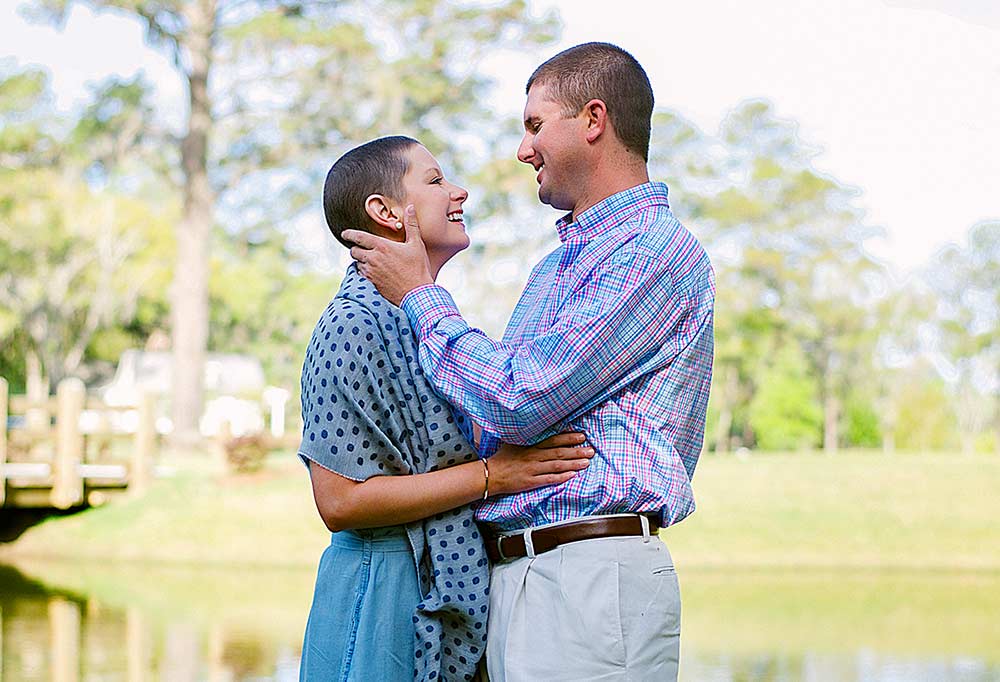 Photographs are of Dr. Cannon’s patients.

“When she told me about this new challenge, I spent about 30 seconds in another world,” Garrett says. “She was so calm. She just said, ‘This is what we got,’ and so I came back to it and said, ‘okay, let’s get a plan and execute that plan.’”

The couple already had a date set, and Hanna didn’t want to postpone the wedding. She would have to delay her graduation from nursing school in order to focus on her treatment, but she was determined that her wedding would be like any other day, a celebration of life and love and family and friends. She had made up her mind: “I can’t let this slow me down or interfere with my life and what I am planning on doing.”

Hanna was referred to Dr. Cliff Cannon, and she remembers that first meeting well. “When it comes to choosing a plastic surgeon, you want someone you can trust and feel confident and comfortable around,” she says. “That first visit, we clicked.”

When it comes to choosing a plastic surgeon, you want someone you can trust and feel confident and comfortable around.

On August 4, 2015 Hanna underwent a bilateral mastectomy, and Dr. Cannon was there. He shakes his head with a smile, recalling her faith and fortitude. “At lowest point, she never let you know she was struggling,” he says. “She never wanted any sympathy.”

Hanna, of course, has a unique perspective on what constitutes a struggle: “Compared to what I went through when I was younger—chemo, radiation, marrow transplant, it’s been a walk in the park.”

With Faith As Her Guide

After three months of chemotherapy, Hanna underwent her final surgery on December 30. She started back to school in the New Year, all the while planning her wedding, including a gala reception on Garrett’s family farm.

(Hanna’s father happens to be the Mayor of Jesup, and as the planning ramped up, when he’d complain, “This isn’t the last supper! “ Hanna would say, “Then stop adding people to the list!”)

Asked to dish on the sweethearts’ courtship, Hanna doesn’t bat an eyelash. “We’d been dating since I was fifteen, then we went off to college. I was in Athens and he was at Georgia Southern. I laid down the rules, but he wasn’t abiding, so we were separated for three years.”

“It’s almost the perfect story,” she muses. “December 2009 he moved home and we went on a few dates and picked back up where we left off, but as better people, knowing who we wanted to be.”

“Same with my treatments and my surgeries: it is not about my plan. We are Christian people and family people, and I do realize it is about His plan. If it is meant to be, it will be… and it is.”

The new Mrs. Garrett Lewis will graduate from nursing school in December.

Know your surgical options when it comes to breast reconstruction, including the DIEP Flap.

I couldn't let breast cancer slow me down or interfere with my life and what I am planning on doing. „