For this emergency room nurse, getting back to work was job one. 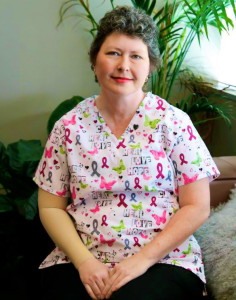 Becky Griffin was working 36 to 48 hours a week as an emergency room nurse. She’d spent over twenty years in rural emergency rooms and was working for two hospitals, one in her hometown of Baxley, Georgia and the other thirty miles away in Vidalia.

In November of 2010, however, she received her diagnosis—she had breast cancer—and all of a sudden she had to start thinking about herself.

Becky was referred by her hometown physician to the Nancy N. and J.C. Lewis Cancer & Research Pavilion at St. Joseph’s/Candler. As always in these situations, there was only one thing on her mind—she had breast cancer. Everything else was TBD, requiring a series of choices she wasn’t necessarily ready to make. Nevertheless, with the help of Dr. Howard Zaren, she chose a clear course of action that would make her whole.

“The choices were, A, lumpectomy with radiation or, B, mastectomy, both requiring evaluation of my lymph nodes, and I didn’t like either option, but there was no option C. I said, ‘Well, if we’ve got to do it, get it over with, I just want to get better and get back to work.’”

Dr. Zaren walked Becky through all of her available options. She had never undergone surgery before, but she knew that she had to do something and that she wanted some kind of reconstruction. “I was still shell-shocked,” she recalls, “I just wanted to make sure that my clothes would fit and that I didn’t look flat-chested. I guess I was worried about body image.”

For years, the TRAM flap has been the standard of care, replacing sacrificed breast tissue with skin, fat, and muscle taken from the abdomen. More recent advances in micro-surgical technologies have given doctors another, more attractive option: the DIEP flap. Now available to women in Savannah, the DIEP flap technique leaves the abdominal muscles intact, borrowing skin and flesh only in the creation of a new, living breast.

Becky recalls her decision: “Dr. Cannon said that if I didn’t want the DIEP, he would refer me to someone who does the TRAM, but I didn’t want a whole lot of muscle gone from my abdomen. Working in the emergency room, pulling on stretchers and pulling on patients, I didn’t want to worry about pain. Plus, there’s the shorter recovery time. I had been out a total of fifteen months with the surgery and chemo, and I didn’t want to be out any longer than I had to.”

On January 1, 2011, Dr. Howard Zaren performed Becky’s bi-lateral mastectomy, which was followed by Dr. Cannon inserting tissue expanders in order to maintain the skin pocket and preserve the infra-mammary crease (the fold underneath the breast) for eventual reconstruction. Thus began her road to recovery—a road that would take her from one hospital in Savannah back to her job in the Appling HealthCare System.

Becky would have to wait a year for reconstruction as she endured a second surgery in order to remove a cancerous lymph node that was discovered in her underarm. She started her first round of chemo in March, therapy which she continued through September. Next, she had to build up her strength and gain some weight in her belly in order to provide ample tissue for the DIEP flap reconstruction.

Throughout November and the Christmas holidays, she had no restrictions on her diet. “Dr. Cannon told me, ‘Don’t worry about calories and eat your protein! I had been on steroids during the chemo, and they make you gain weight too. I had all the Little Debbie’s and Ben & Jerry’s ice cream I could eat. That was the cherry on top kind of thing, but then after surgery I had to quit eating like that.”

Getting Back to Work

Becky didn’t have any complications following her DIEP flap surgery. As Dr. Cannon put it, “She never skipped a beat.”

Within three weeks, she wanted to drive, but Dr. Cannon, who places an emphasis post-operative care, made her wait another week or so. “The first two weeks after, I would go see him in the office, and he would text me during the weekend. I thought that was good. That’s almost unheard of. And I am sure he did other patients the same way, not just because I was a nurse.”

At seven weeks, she went back to work, working nine hour shifts instead of twelve hour shifts. “I was in the infusion clinic for a while and have since been moved to a different department due to staffing changes, nothing to do with me.”

Six months following her reconstructive surgery Becky reports, “I still have a touch of numbness in my belly, but other than that everything has healed fine. I walk a lot in my present job. I have to walk the halls three or four times a day or more. That little bit of numbness is there, but other than that, nothing else is different. I feel as good as I did before surgery.”

“I would recommend it,” she says of the DIEP Flap, “You’ve got the decreased recovery time and not as much rearranging going on with your muscles. I don’t have to worry about standing up straight—I know a lady that had a TRAM, and she says she still has problems with her stomach. I haven’t had any with mine.”

“I am just so thankful to be pretty well and to be able get back to work.”

I didn’t want a whole lot of muscle gone from my abdomen. Working in the emergency room, pulling on stretchers and pulling on patients, I didn’t want to worry about pain. Plus, there’s the shorter recovery time: I had been out a total of fifteen months with the surgery and chemo, and I didn’t want to be out any longer than I had to. „