Cynthia Mallard - Making Her Own Odds

She changed the game, just by asking the right questions. 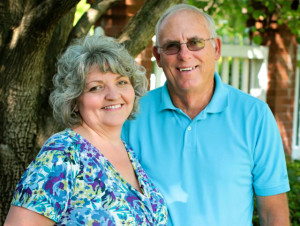 On her 49th birthday, Cynthia Mallard went in for a routine screening mammogram. She had a family history of cancer. Her mother had been diagnosed with breast cancer in her late 60s, and with nearly 30 years experience in cardiac and pulmonary health care, Cynthia knew the odds.

For several years, she and her closest friend had been scheduling their mammogram appointments together, a way of making sure they each went every year. Cynthia didn’t tell anyone else about the screening and she didn’t tell anyone at all when, the very next day, the Breast Imaging Center radiologist, Dr. Lesia Jackson, identified something on the mammogram that she considered highly suspicious.

“I figured there wasn’t much to it and I didn’t want my family to worry until I had answers,” she recalls. “But Dr. Jackson recommended further testing and said, ‘We need to do this right now.’ So I was face down on an x-ray table, my breast hanging through a hole with a biopsy needle in it, and I thought, Oh dear, nobody knows I am here.”

Thankfully, one of the technologists at the Breast Imaging Center was a longtime friend and stood by her side for the procedure. The next afternoon, Dr. Jackson called Cynthia back into her office to tell her that she was positive for ductal carcinoma in her left breast. She was referred to a specialist, Dr. Paula DeNitto, and had an appointment the very next day.

DIEP flap reconstruction seemed to be the gold standard, and as she began asking around the hospital, one surgeon’s name kept coming up: “I spoke with a bunch of my colleagues and a few of the doctors, and several of them said, ‘Everyone says Dr. Cliff Cannon is wonderful. I think it would be worthwhile to talk to him.’”

She met with Dr. Cannon that very afternoon and, as a health care provider, Cynthia knew the right questions to ask. In consultation with Dr. DeNitto, she had decided upon a double mastectomy, and so Dr. Cannon went over her reconstructive options, describing, among them, DIEP flap reconstruction, in which he would use her own tissue in order to create a living breast (and without sacrificing her abdominal muscles).

“We talked about his success rate and his infection rate,” she recalls. “He talked to me for 45 minutes and never acted like he was in a rush. I left his office with his cell phone number.”

Dr. Cannon and the DIEP Flap

Cynthia had undergone previous abdominal surgeries, including two c-sections, which can compromise the tissue and blood vessels needed for successful DIEP-flap reconstruction. During her second visit, Dr. Cannon spent two hours with her and her husband, reviewing the results of an additional CT-scan and confirming that, yes, she was in fact a candidate for the procedure.

“Dr. Cannon was just incredible. In this time when doctors are so busy and overworked—and I know he is, too—he took all the time I needed. He said, ‘You go home, talk with your family and think about it,’ but I had thought about it all I needed to think about it.”

Following surgery, Cynthia spent Saturday and Sunday in the Cardiovascular ICU. On Monday she was transferred to the oncology ward. On Thursday, she went home. “It all went exactly like we planned for it to go,” Cynthia recalls. “Working in health care, I know that things can always go wrong, but in this case nothing did. Everything went just like it was supposed to.”

“You know your own body.”

Cynthia’s situation was unique. She was a determined advocate. Her doctors had identified cancer in only one breast, but she wanted a prophylactic mastectomy and lymph node testing on the other side because, as she said at the time, “I don’t want to ever go through this again.”

The chances of discovering a second breast cancer following an initial diagnosis is low—for women with unilateral breast cancer, a subsequent contralateral cancer develops in 0.5 to 1.0% per year, with a cumulative risk of 15%*—and prophylactic (preventative) mastectomies are generally indicated based only on genetic studies or a patient’s own desire.

Cynthia wasn’t interested in playing the percentages. “When I saw the path report, I knew I wanted bilateral. The only percentage I had in my mind right then was 100%.”

Her insurance company, of course, wanted to play it by the book. They denied the prophylactic procedure, but Cynthia disputed their decision and won a victory that has changed the game for women who may have to follow in her footsteps.

“Five days after my surgery, when the second path report came back, my doctor said, ‘I don’t play the lottery, but I want you to pick me some numbers.’ My right breast tested positive for two types of cancer, and if I hadn’t done what I did, six months later it might have spread.”

Cynthia’s insurance company—which happens to be one of the very best—has since revised their policy regarding coverage for removal of the contralateral “normal” breast in women with breast cancer.

Keeping it Close to Home

Cynthia has no regrets: “I could have gone to Charleston or New Orleans and had this procedure done by someone with a little more experience, but I would have met that that doctor one time and been far away, in a hospital I didn’t know.

“Having my surgery here in Savannah, I was able to be close to my family and friends. I was taken care of by co-workers, who treated me like family. I felt so comfortable and reassured when I went home, knowing that Dr. Cannon was just a phone call and a few minutes away.

“Dr. Cannon wants this program to work in Savannah. He doesn’t want the other, older procedure to be the only option for women who don’t have the option to go elsewhere. I got the best of everything right here in Savannah, everything along the way fell right into place, and I feel like Dr. Cannon was some kind of angel or a good luck charm.”

I got the best of everything right here in Savannah, everything along the way fell right into place, and I feel like Dr. Cannon was some kind of angel or a good luck charm. „