Debra Wynn - Not by Faith Alone

Expert care and the support of family and friends gave her a second chance. 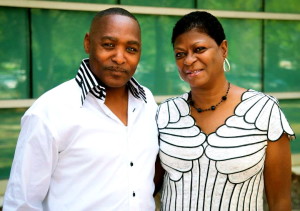 Debra Wynn’s breast cancer had been in remission for almost two years when her doctor discovered that it had returned. When she heard the news, she was nevertheless at ease.

Led by her strong faith, and thanks to the support of her husband, family, and friends, she faced a second round of treatment resolved to make the right, informed choices for herself and her future.

That ease wasn’t there the first time she was diagnosed. Debra was momentarily adrift. As she says, “The first time I went all to pieces.”

She had been doing sit-ups following an early morning walk, and her cursory exam led to diagnosis and, later, conservative therapy and radiation treatment under the care of Dr. Steve Yeager in Savannah, Georgia. “I was doing an exam and I told my husband, I said, ‘Come feel this knot on the side of my breast.’”

“I was all to pieces, asking God, ‘Why me?’ I asked the Lord to help me, and whether it’s from the Lord, your husband, or your family and friends, you need support. You really need that support, because you get to thinking, and when you are by yourself it can be difficult with everything going through your mind. You don’t need that. You have got to stop the negative thinking. You’ve got to have support and you’ve got to have that faith.”

The vast majority of patients diagnosed with breast cancer have the option of conservative therapy—a “lumpectomy” to remove the cancerous tissue, followed by radiation therapy, which is mandatory. This option allows the preservation of breast tissue with usually only minor long-term effects due to the radiation.

Should the cancer recur, in most cases radiation is no longer an option and a mastectomy— complete removal of the breast tissue—is the recommended procedure.

Following her diagnosis and surgery in 2009, Debra Wynn had undergone about 46 radiation treatments. The effect of radiation on the breast skin can be unpredictable, but Debra still had several reconstructive options available to her. Her doctor recommended a meeting with Dr. Cliff Cannon of Cannon Plastic & Reconstructive surgery in order to discuss those options.

Dr. Cannon and the DIEP Flap

“I had confidence in him,” Debra says, recalling those first meetings with Dr. Cannon, “We sat down and had a talk for a couple of hours, and I came back again and we talked for another hour or so. Some doctors don’t sit down and explain things to you, but he was straight up with me.”

Following a mastectomy, there are several options for reconstruction, including tissue expanders (otherwise known as implants). TRAM and DIEP flap surgeries are more complicated, but both replace the sacrificed breast with the patient’s own tissue.

Dr. Cannon explained all of the available options to Debra, but given an active lifestyle, she was eager to learn more about DIEP flap reconstruction. She recalls, “I am the type… I was running four miles a morning Monday through Friday, so I believed the DIEP flap was for me and that I would succeed with it.”

The DIEP flap is a complicated microsurgery that replaces breast tissue with skin and fat taken from a woman’s belly. Importantly, the procedure preserves the muscle in the abdomen, creating a healthy breast of “own” tissue in greater than 95% percent of all cases.

The Importance of Post-Operative Care

Dr. Cannon re-made Debra’s breast, at the same time performing a tummy tuck… but surgery was just the first step.

The success of DIEP flap reconstruction is assured not just by the surgeon’s skill in the operating room, but also thanks to superior post-operative care. Strict, in-hospital monitoring in the first 48-hours is required to ensure the viability of the new breast. Thereafter, Dr. Cannon and his team keep a very close watch on their patients.

“I didn’t have any real problems,” Debra recalls. “Only once did my husband have to call Dr. Cannon, and he came out to see about me on a Sunday. You hardly ever find a doctor that will do that. He came out to see me on a Sunday, on his own time, and that made a big difference. I’ve been telling everybody: when you’ve got a doctor like that, that’s a good doctor.”

Debra’s reconstruction did more than just succeed—the stem cells in the fat that was transferred to the breast site actually helped rejuvenate the skin envelope, which had been somewhat damaged by radiation therapy following her first diagnosis.

She is thrilled with the result. “I am healed!” she says, “I’m not worried about it anymore. It’s been real successful, but Dr. Cannon is still concerned about how I feel and calls to make sure that I am all right. I still go see him for check-ups, but who wouldn’t want to go to a good doctor’s office, when he took care of you like that?”

Support Makes All the Difference

One year later, Debra Wynn is doing sit-ups again—about 25 a day—walking a mile a day on the treadmill and she is ready to get back to running.

She remains grateful for the devoted support of her family, including her sister and her son, Jay Jackson. She also relied on the support and prayers of her church family, led by Drs. Larry and Mary Murray of Fellowship of Love Outreach in Jesup, Georgia.

Most of all, however, she is grateful for her husband, Bruce Wynn, who stood by her throughout. “That’s my best friend, my husband. He did it all. You couldn’t ask for a better husband.”